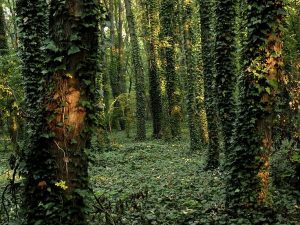 “Can you help explain this bid I got last night?’

This question came from a client who was unable to meet with our arborist and asked that we “just swing by and leave an estimate” for the tree work requested. Now he was calling with questions. Not that he couldn’t read the bid, he didn’t understand it.

I pulled out a copy of the bid we left him. The request was to remove a dead branch on a poplar tree that was hanging over the street. Instead our arborist had written “Remove the dead ivy covered tree”. And had written a price for that.

When I explained to the client that his tree was dead, he begged to differ.

“It can’t be dead. It has lots of green leaves on it”

At least he understood the importance of green leaves in determining whether his tree was alive or not (more about that from clients who don’t!)

“Yes, but the green leaves you are seeing are from the ivy that is growing in your tree.”

“Wow. Really? I’m going to have check it out when I get home.”

The client called back a day or two later and confirmed that our arborist was right, the tree was dead. And the green leaves he saw belonged to the ivy growing in the tree.

The question is did the ivy kill the tree? The answer is “Not directly”

In most cases trees that are dead and covered with ivy were probably on their way out when the ivy took over. English ivy (Hedera helix) is the most common ivy we find on trees. It is an introduced species that climbs walls and trees by using suction-cup like roots to hold fast to its selected support. The roots do not penetrate the bark and suck nutrients from the tree like a parasite would. Therefore, the ivy does not directly kill trees. But as the ivy grows, its vine thickens and can become as wide as a iPhone. One of biggest risk the ivy presents is if its foliage is allowed to overtake the foliage of the tree and interfere with the tree’s ability to photosynthesis. This in turns can weaken the tree and make it more prone to disease and branch dieback.

Even if the ivy does not engulf the tree’s foliage with its own, allowing the ivy to proliferate at the base of the tree and cover the root crown can cause problems. The ivy competes with the tree for nutrients and water. And if the ivy is irrigated on a regular basis during the summer months the ivy up can hold moisture against the trunk. The added moisture can create a perfect environment for the formation of decay fungi, and decay can weaken the integrity of the buttress roots and predispose the tree to falling over.

In conclusion, here are some tips for dealing with ivy in and around trees:
1. If possible, pull the ivy out of the tree and away from the trunk. Create an ivy free zone 1-2 feet away from the base of the tree.
2. Inspect any trees that are heavily covered with ivy to determine if they are alive or not. Try to determine the ratio of ivy leaves to the tree’s own leaves
3. When in doubt about what to do, have one of our certified arborists inspect the tree for you and give you his professional recommendations.

Due to “shelter in place” restrictions we are not giving bids nor scheduling tree work for the next 3 weeks. If you have an estimate or tree work scheduled during that time frame please email office@traversotree.com or give us a call at (925) 930-7901 and we will reschedule you.